Home/ Fantasy/ Journey Through the Shadow Realms/Prologue: A Stranger In the Desert
LOGIN
Library
Add to library

Prologue: A Stranger In the Desert

The hot wind blew across the desert and disturbed the sand on top of the dunes that were the only features in that arid landscape. The sand looked golden under the harsh sun, the tiny grains reflecting the light a hundred times and making the scorching heat even more unbearable. The sky was empty, a bright featureless curtain that only turned bluish gray near the horizon. There was not a wisp of cloud in sight and no bird dared to fly across a sky that was as barren as the desert below.

The stranger reached the top of a sand dune and surveyed the undulating landscape, noticing the lack of vegetation that could have otherwise broken the sun’s dominance over the desert. The few creatures that had managed to survive under such hostile conditions had buried themselves under the shifting sand and remained well hidden from the unforgiving sun. The stranger seemed to defy the harsh elements and stood out in the open with only a white scarf as face covering and a flowing garment that reached the ground.

Behind the stranger were footsteps that became a thin trail of disturbed sand that eventually led to a small outpost faintly visible in the distance. The crumbling walls of the outpost hardly protected anyone and only served to mark the area as a place where humans can converge for a while before moving on to their destination. For not a few travelers, it was also the last vestige of human civilization that they would see before perishing in the desert.

A gust of wind caused the stranger’s clothes to flutter like a flag, the hot air penetrating the thin garment. The stranger stood firm while surveying the horizon as dark shapes started appearing from behind the sand dunes. The stranger knew that it would not take long before these dark shapes transform into menacing figures intent on seizing the most coveted object in the whole of Sendorra.

The stranger descended the sand dune and did not take long before reaching its base. With feet planted firmly on the sand, the stranger slowly raised a hand and opened it to reveal a round featureless stone. The stranger dropped the stone a short distance where it was partly covered with sand and then took out a small waterskin. With arm outstretched, the stranger slowly poured water over the dark stone.

A sudden burst of blue light erupted at the spot where the stone was dropped, emitting bright particles that revolved around the stranger and left bluish ripples in their wake. The stranger did not seem surprised and slowly raised both hands towards the sky. A ball of azure light slowly rose to the air, blue particles swiftly revolving around it. At its nucleus was the stone that the stranger had dropped and had gained a luminous quality. The stranger was enveloped by the flying blue particles and floated in the air towards the scintillating stone.

The dark shapes that the stranger saw on the horizon became recognizable as soldiers clad in black garments. They rode on dark steeds that seemed to fly across the desert and soon crested the sand dunes until they reached the area around the stranger. The soldiers looked up, as if mesmerized by the ripples of blue light, but no sooner had they stopped did they took out their bows and aimed their arrows at the floating spectacle in front of them. A tall soldier with a helmet decorated with red plumage raised a fist and shouted with a loud voice, signaling the rest of the soldiers to release a barrage of arrows towards the levitating stranger.

The sky was filled briefly with flying arrows, like birds darting across the air from the soldiers’ bows. Then, instead of hitting the stranger, the arrows were stopped by an unseen force and hurtled towards the ground. The tall soldier did not seem perturbed and issued a signal to release more arrows at the stranger. The sand below the stranger became littered with broken arrows as more of the wooden projectiles dropped harmlessly from above.

The stranger stretched both hands and waves of blue light that resembled ripples on the ocean surface emanated from the stone, creating the illusion that the sand below was underwater. As the stranger looked, water suddenly erupted from the dry sand and quickly began to fill the low areas between the sand dunes. The soldiers noticed that the water was rising fast and tried to escape, but they were too late. The water foamed and hissed as it swallowed the dark soldiers and their steeds.

A few of the soldiers managed to scramble towards the top of the sand dunes. The stranger saw this and raised a hand towards the soldiers that were trying to escape the rising water. Huge tentacles rose from the surface of the forming lake and hit the escaping soldiers until smoke emanated through their armor, their bodies dissolving and disappearing under the water.

The water soon ceased to hiss and churn as all of the stranger’s enemies were engulfed by the waves and disappeared underneath the deluge. The ripples of blue energy slowly dissipated and the stranger felt drained of energy. In a moment, the stranger’s empty garments rippled in the wind before falling to the edge of the water. The blue stone that was floating only moments ago dropped to the shallows where it continued to scintillate.

After a while, two people garbed in flowing garments similar to that of the stranger appeared from behind the sand dunes. A young woman saw the blue light pulsating in the shallows and entered the water against the warnings of her companion. She saw the blue stone still scintillating under the water and she waded towards it. 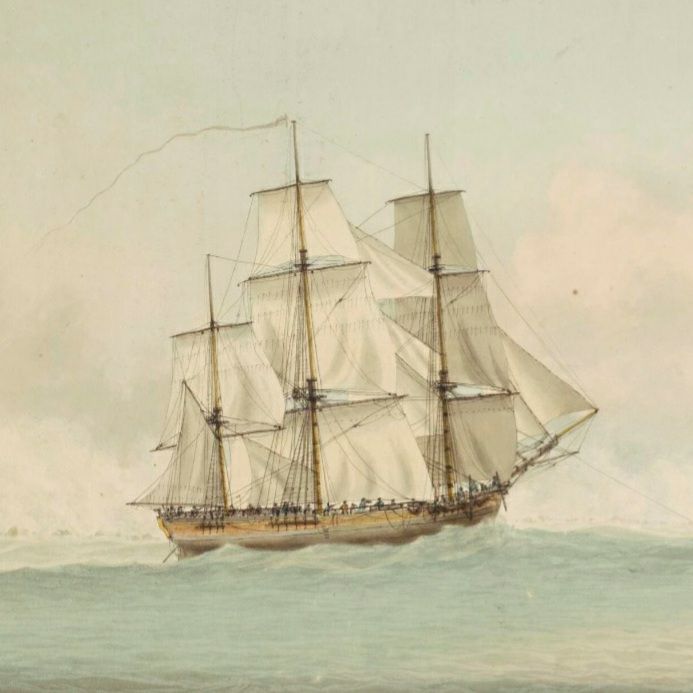 Captain Cook
I think this stranger is nuts! I can't wait to find out who he is!
VIEW ALL COMMENTS