I found a noble

Cold October mornings were a sight to behold every day for me. It was one of the advantages of living in the mountains.

The early settlers of the village were travelers who saw the mountains as a great place to stay and even hide from their enemies.

It's been years now and we still resided here. I watched the foggy splendor taking in the cold air and feeling satisfied.

"Maisy, where are you?" I heard my father call and instantly woke up from my daydream.

I had this habit of imagining to be somewhere else and tended to drift far off.

"Coming Dad," I said and closed my windows.

The sight was ruined after all.

The wooden floorboard creaked as I rushed downstairs clothed in one of my mother's old gowns.

"Yes father", I politely acknowledged when I got to him.

My father was a middle-aged man strong for his age. Being the village' Chief, he mostly had nothing to do so he spent his life on his rocking chair, sipping a cup of palm wine and watching over the horizon.

"Maisy..." Her father said, sounding husky due to having much to drink at such an early time of the day.

"Yes, father." I bowed, praying he would send me to the ranch to pick up something.

Only then did I have some alone time, to meet friends and to ride the stallions.

After my mother's death, Father had been struct with where I should be and when I should be there.

Punctuality had become a part of me and although I sometimes broke the rules, the little I received was a slap and a warning not to do it again.

"I want you to go the ranch and remind Ewan to saddle up Ria for the big match." My father said.

Ria was his best horse and he mostly used her to win bets ranging from money to landed properties. Father hadn't lost a bet ever but Ria just put to bed recently and he was afraid she might not be up for the challenge tomorrow so she had to check up on her.

"And those mess with the horses this time." My father warned.

I ignored his last statement and dashed outside.

I picked up a basket and raced for our orchard to pluck some apples.

Ria needed a treat if I was going to riding her this afternoon.

It was forbidden for women to ride horses but I had secretly taught myself and went on a joyride with Ria each time father sent me and Today was going to be no different.

"It's just like testing how far she can go," I told myself before running for the plains.

Ria had chestnut coat as fluid as water, stocky limbs. The soft spring soil was no match for her hooves and in their wake sods would be sent flying in an arcing spray. Her head was extended forwards but the ears flat back, puffs of moisture escaped her nostrils with each breath she took. She wasn't exceptionally tall, fifteen hands at the most; but she was an impressive sight.

Ria reminded her of her mother who originally owned the stallion.

Ria whinnied me seeing me approach her. She then delightfully trot toward me.

I picked out an apple from my basket and fed her. She nibbled it away quick as lightning and licked at my fingers for more.

"Father said I should ask how she's faring," I told Ewan who got Ria all saddled up.

"She's still sore but good to go."Ewan said, "and I assume you want to take her out for a test drive."

"Ok." He gave in immediately knowing how demanding I was.

I nodded excitedly and gave Ria another apple.

Ewan got me into Ria and I galloped away.

A loud whinny, thunderous hoofbeats, racing across the plains, barreling through sand and running like the wind. Into the plush meadow, we went, smelling the clean, fresh air.

It was an exhilarating experience.

We cleared the 10-foot tree lying in our path, narrowly missing the 6-foot ditch on the other side but then Ria suddenly stopped.

I tried to get her to go but she maintained her position and staring into a small bush with fear.

I turned to the bus and noticed it was moving. I held my breath and wondered who was there.

I heard a twig snap and was greeted by glowing green eyes.

The sight made Ria uncomfortable and she kicked her legs.

Father might love me a lot but he would definitely more than scold me of his best horse took the fall for my mistake.

The creature came into the open and I got a look at it.

It was a wolf, a white wolf.

I noticed blood was trickling heavily from its hide.

The creature did nothing. It just stared up at us.

I tried to calm Ria ensuring that she made no movement and hoping the wolf would leave is alone.

I had no idea wolves resided in Linsea. Most of the time, all we ever dealt with was Bears.

The wolf trudged forward but this time Ria would not be kept calm.

She stomped her feet to the ground scaring even the Apex predator.

The creature stumbled back into the bush out of fear.

I knew I shouldn't but knowing the animal was injured, I got off Ria and approached the shrubbery following the trail of blood.

The blood trail stopped and I spun around to go the wounded beast but instead I found something bigger.

I approached the body with caution hoping I didn't startle the animal but in place of the wolf I saw a human, a man yo be precise.

Mud and grit had become enmeshed with raw pink flesh and was spotted with blood. One thing was for sure, it was bad.

I suspected the wolf had harmed him.

The injured man was five feet, ten inches, brunette and with quite a handsome face. He was dressed in a surcoat.

Then I noticed an emblem engraved on it.

He was a royal! 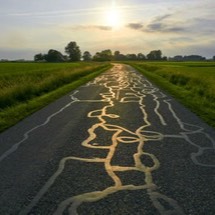