When I opened my eyes, the only thing I saw around me was the darkness. It felt as if I have been locked in the darkest dungeon as in the movies. I could feel coldness beneath my body. I was laid on the cold floor maybe.

The darkness was giving me a fear. For some seconds I even thought that I was dead but the sounds of my own heartbeat which was scaring me to the hell assured me that I was still alive.

I tried to cry out for help but then realized that my mouth was corked with some clothes. My voice wasn't able to get to people clearly.

I could feel the warmth on my cheeks and I could comprehend that my tears were on their full speed in fear and anxiety.

I felt that my hand was tied and even my legs. I was unable to move both my hands and legs.

I kept on looking at the darkness above and dropped the silent tears down my cheeks.

Right at that time, I thought, thought that I shouldn't have ran away from my home. I should have stayed over there and give a chance to Jeremy. At least I wouldn't have been killed.

The warm tears rolled down the corner of my eyes as I looked around and darkness was what I see.

I am not so claustrophobic but the darkness of that type would scare anyone in a strange place. But at this time, I couldn't even cry and shout to anyone.

I held my breath and tried to gain the courage that I needed at that time.

"Hold on, Echo. Just hang on there. You don't even know what's going on? Maybe it's not worse as you think," I consoled myself.

The loud sound of my own heartbeat was the only sound I could hear. But after some hours, I could hear the footsteps of someone coming close to the door.

My heartbeat ascended the fear as he kept on coming close and when the door was finally opened, I felt as if my heart was trying to jump out from it's place.

My eyes opened wide with the eyesight of the hunky man whose back was turned to me.

He was dressed in the black suit and then, his back was turned to me. He had such a great physique from behind as if he was the regular practitioner of the martial arts.

I quickly tried to wiggle out from there thinking that he might be someone who could help me to get out of there. Preferably, I thought he was a hotel staff.

I shouted loudly and tried to move body to make him notice me. But even after, shouting for couple of times he didn't look back. He kept on turning his back in me.

I elevated my gaze towards him. I was mad because h wasn't listening to me.

"You Asshole," I swore underneath my breath.

But as soon as I swore him, his back was turned to me.

The first thing I saw after he turned was his bright shining black shoes which turned about and walked to my direction. I kept on gazing at his pointed black shoes.

Then, it went to his long legs and then, to his waist...

Is that a gun on his waist? It does seem like a pistol? Don't tell me it's the real one? I have only seen them on movies.

But my heart was shaken when I saw that his hands were all painted on blood.

His palms were all stained on blood. As they were approaching closer and closer to me, it started to terrify me.

I wanted to wiggle back from him but all of my body was tied. I couldn't go back quicker than him.

When there was no more of a space for me to run I still tried to move my body but it was a worthless attempt.

I could feel him leaning towards me. He squat one of his legs and rested the other on his knees and looked at me.

I was scared to look at him. I closed my eyes on fear.

I could feel his fingers gripping my chin,making me look up towards him.

My lids opened wide as they looked at him. Suddenly, my body felt numb and lifeless on his touches.

The first thing I noticed on his face was his enraged eyes. They showed so much of anger in them.His eyes were burning.

I could see his face had so much stains of blood to be able to see his face clearly.I could feel his lopsided twitched smile on his face.

"Tu chi sei( Who are you)?" he said as he gripped harder on my chin and removed the cloth.

I wasn't  getting what he was trying to say. I stayed quiet and showed only a fear to him.

Even after couple of times on enquiries, he didn't get answer. Then, he asked, " Who the fuck are you?"

I was quite shocked to hear him speak English and his accent was really better.

"I...I didn't see anything," I said in a rush even without realizing that he wasn't asking me about anything seeing.

"You saw what?" He roared making my whole body to shake.

I couldn't speak in front of him.

"No...thing..," I was about to say when he gripped my chin tightly causing me immense pain and picked me up from the ground.

"Tell me what did you see?" he said looking furiously on my eyes. I could speak nothing except for the tears on my eyes.

"Ple...ase...," I requested but my request seemed nothing in front of him.

Looking furiously at me, he walked towards the another side of the store room and came out dragging something.

But after sometime, I got to know that he was the same person that I had seen before.

I could only shiver on the scene in front of me.

How could I get enmeshed on this? How did I ended up being here?

My life seemed as if it was more on his hands now.

Laying the body on the floor he walked towards me abruptly and then untied me and pushed me towards the body.

"Check him if he's dead or not?" he said as he pushed me towards him.

I was scared even to go near that body. The body was scary. The blood stains were all over his body and the wide opened eyes of him was scaring me more.

When he pushed me to him I bumped on the chest of dead person and I could hear no heartbeat of him.

I slid back from that body. How can this ever happen?

I cried loudly as found he was dead.

With a frustrations, he punched hard on the wall quite a number of times making his hands bleed more with his own blood.

Seeing his anger, I closed my palm and tried not to produce any sound in front of him.

He then came towards me.

"Please, don't come near to me.Please spare my life. I have so much to do in my life," I prayed inside my heart as I closed my eyes on dread.

After couple of minutes, I realized that he was striding towards another direction.

"You want to trick me?" His rough and hoarse voice hit my ears.

My eyes widened as he said that to me and my head shook to deny him.

He left the grip on his body that he was holding and released it to fall on the floor right beside me.

I screamed with whatever energy I had within me. Who would love to lie down with the bloody dead body?

"Don't lie to me. You know what I hate the most in this world, the liars and the betrayers. You are acting as both of them.You know what punishment I give to them," he clenched my jaw strongly making it to pain.

The blood from his knuckles were all painted in my face and his grip was causing me to pain.

I shook my head as yes which made him leave a smirk on his face.

"I don't know what should I do with you?"he said as he raised up his revolver in another hand and then filled it with some bullets and pointed on my forehead.

" It's your choice. Choose whether you want one of the bullets or the more on your head," he said with a stern voice.

My eyes elevated to his blue eyes which were telling me that he wasn't joking with this thing. He was total serious with it.

"Oh! Yeah. What's your last wish?" he asked me running his revolver from my forehead to my jaw and then pulled down the cloth in my mouth with it.

"I...I don't want to die.I...I... Want to live... Please," that was the most honest urge of my whole life. I never thought that I would be pleading for my own life one day. And the death so close to me looked so scary. 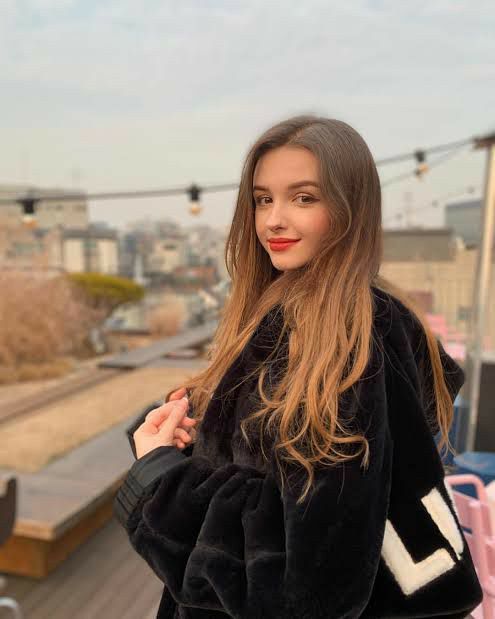 Edith
Oh no. I think Jeremy followed her