Jia's head jerked up. "Sorry," she said hastily, wanting to pinch herself for zoning out in a stranger's car.

This was why she preferred the subway. Yes, it would have taken far longer than this forty minute drive from Manhattan to the Bronx, but anonymity among strangers felt so much safer. And she could only imagine what kind of attention they were attracting now as they cruised down a dirty, pot-hole ridden street manned only by a few homeless, some delinquents out past curfew, and generally everything that the rich and glitzy Manhattan wasn't. The Bronx borough - particularly this side of it - was a different kind of beast altogether.

"If you could just drop me off at the intersection of Mancala and Grant, I'd appreciate it."

"I have strict orders to see you to your doorstep, ma'am," the chauffeur said apologetically. "It is very late. And I think in your state, you may draw the wrong attention."

"I have something to do before I get home, sir," Jia lied. Vague, yes, but he couldn't disprove it. That was her business.

Too bad; he seemed like a nice man. She wished she could be honest with him, but circumstances weren't so forgiving. Talk about a stereotype, though, she thought privately: a chauffeur in his mid-forties, elegantly sporting salt-and-pepper hair, and a faded English accent on top of that? Ticked off all the boxes.

At least appeared far more personable than his employer, Atlas Grayson. She hadn’t been able to help but like his smile when he held the car door open for her earlier on the curb in front of the restaurant. There had been no judgment or discontent in his eyes, even though he must have wondered about the sudden development.

Indeed, Atlas Grayson had given him no explanation for his orders to take Jia home. Nor had he said anything about what he planned to do with Richard, who still lay unconscious in the VIP room and possibly missing a few teeth now.

"You don't work here, remember?" Atlas had sardonically replied when she protested leaving. "You need to get out of here. I'll handle things. Someone will come by in the morning to pick you up at eight, so be ready."

With no choice but to reluctantly obey, Jia had found herself where she was now, in the backseat of his car. Leather seats with heating functionality, a spotless interior, tinted windows - this luxurious German sedan was worth far more than Jia would ever be able to afford in her lifetime.

"I am happy to take you there as well, ma'am," the man offered kindly. "But I still need to know your address for the morning."

Ah, right, Jia thought with a sinking heart. Mr. Grayson had told her to be ready by eight. She was supposed to start her morning shift at the restaurant again at seven-thirty, but that was out of the question now. Incidentally, that left her with a conspicuously unoccupied block of time tomorrow until the evening, something that the man had taken full advantage of.

"It would be a lot of trouble for you to come out this way," she said, trying to steer destiny in a more favorable direction. "I can take the subway and be where I'm needed. I'll be early, and that way I won't be such an imposition."

"Please, call me Jia." Maybe she just needed to make it more personal to sway the chauffeur. Her heart thudded anxiously; until she knew what kind of trouble she was in, she didn't want to reveal her address. She couldn't let the twins get pulled into this.

"Then I'll have to insist you call me William," the man responded warmly, and despite her nervousness, Jia felt the uneasy knot in her stomach relax. Something about him made her want to trust him, but she couldn't afford to take that risk...could she?

"I don't know your exact circumstances, Jia, but I promise you that nothing untoward will happen. I only want to see you safe, and I suspect it'll do both of us good to have someone watching your back tonight. Even if it's only to your doorstep."

Jia looked down at her lap where the tattered top half of her apron lay in a crumple, and a small wave of guilt brushed her conscience. William did seem genuinely worried. It didn't take a rocket scientist to guess what might have happened to her, even if he hadn't been there to personally witness it. It was obvious she had been a victim of violence tonight, and if their positions were reversed, she was sure she would have had a similar reaction.

It was getting late, too. With a defeated sigh, Jia gave William her address, and several minutes later, he came to a slow stop outside an old apartment building. She had only just undone her seatbelt when the chauffeur came out of the car and opened the door for her.

"Thank you," she said in a small voice, cowed by his elegant kindness.

"You are very welcome, Miss Jia. Have a good night."

Jia waved goodbye just before disappearing through the building entrance. She quickly took off her torn tuxedo apron and draped it over her arm to hide its condition before trudging up the stairs to the second landing. She would just tell her brother and sister that work had run late, that was all.

If she was careful, they wouldn't notice anything. Or maybe they were already asleep.

She slid her key into the lock and slowly unlatched the deadbolt. With a slow, cautious push, she eased the door open, revealing a small, dim living room. On the two seater sofa inside, two lumps huddled against either arm under a shared blanket.

"You two should be in bed."

Only one pair of eyes glanced up at her. "Come in, you're letting the heat out. And Jini, move your feet. You're kicking me in the shins." The boy shoved at his twin's knee under the blanket. "Jini, move."

Jia sighed and stepped into the apartment. "It's a school night. Go to bed, guys." The door latched shut behind her.

"Did you at least bring home something to eat if you're staying out this late?" Jini had yet to look up from her phone. "Or did you get a promotion or something?"

"You two didn’t eat yet? Well, it’s too late now, so save your appetite for breakfast." Jia took off her shoes and set them against the wall, barely registering the sarcasm in the girl’s questions. "Brush your teeth and go to bed."

"Do you ever give it a rest, Jia." Jini threw off her corner of the blanket and stood up. "As soon as you walk through the door, it’s a lecture from you. Whatever." She stalked off down the narrow hallway on the other side of the living room, and a few seconds later, the door slammed shut behind her.

Jia glanced around, wondering if the neighbors would pound on the walls in response to the noise. When nothing happened, she sighed again and turned to look at Jisu. "You too," she said softly. "It's late."

"She's mad because of the math invitational this weekend. You never said for sure if you were coming, so I told her you probably weren't going to make it. It's fine, though. We're allowed to go without a chaperone this year since we're sixteen now, so no need." The boy slid out from the blanket and stretched, reaching for the ceiling with both hands.

When had he grown so tall? Jia wondered. And Jini, too, for that matter. "I'll do my best, but something came up tonight -"

"Something always comes up. Aren't you tired of it yet?" He shrugged before she could answer. "I'm not giving you a hard time. I'm just saying - aren't you tired?" And then he swayed off down the hallway as well, leaving Jia alone in the darkness.

She wanted a shower. Needed one, really, but instead she walked over and reached down to grab the blanket that had dropped onto the carpet. She laid it out with a billow over the seat cushions before settling underneath it with a long, weary exhale.

The digital clock on the rickety end table by her head was set to six, but as she took deep, calming breaths to soothe her frazzled nerves, she feared she wouldn't be able to sleep at all.

Atlas Grayson, her mind whispered. What in the world was she going to do?

Mana Sol
That shouldn't happen! Take a screenshot of both the purchase history as well as the locked chapter and send those to support with your concern. They should be able to help you! <3 Finican Mwa
Do you know why they lock chapters that were already bought? 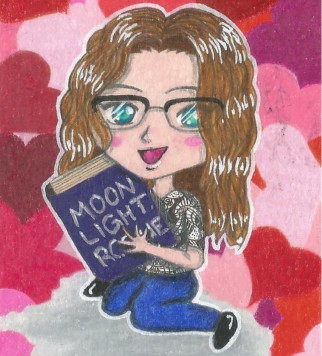 Maria Warren
I hope Atlas helps her improve things. Her siblings don't seem to appreciate what she sacrifices for them or the risks she takes, poor Jia
VIEW ALL COMMENTS