Kayla's POV:I applied to four companies. I thought coming here from New York would make dad change his mind. But he was stubborn.I didn't feel good here. Leaving New York was a bad idea.However, hoped everything would turn out good and I would be able to return to New York soon, to my 'home sweet home'.I entered the bathroom to have a nice relaxing bath. Filling the tub with lukewarm water, I dipped my body in it. My eyes closed as the comfortable water soothed my muscles. I leaned my head against the tub counter.Suddenly, the memory of four days ago played in my head. How I had sex with a stranger!I didn’t know what came over me and I drank with that man. And how we landed on the bed.The sex was hot, wild but sure I felt  regret later.Whatever! I couldn’t pass my entire life in that regret.

Besides, having sex is not a big deal. Many of my friends lost their virginity in school.

The sex was so hot, still had my core soaking in need whenever I remembered. But I was too embarressed to say it loud.

He had the body of a Greek God; a tall, strong body adorned with muscles. He knew how to please a woman. The way his lips, fingers, and cock worked on my body, call me indecent but it was the most memorable night in my life. And he was so huge. The two guys I had sex before, they weren’t able to give me a little bit of satisfaction. But being a woman when you point out your male sexual partner’s incompetence, it always ends up ugly.

But this stranger was true to his words when he said that he would show me the heaven; It was the best night.

After washing my body, I dried up and came out of the bathroom. I was wearing my dress suddenly the mobile rang.I went to pick it up; it was from an unknown number."Hello, who is this?"Hello, am I speaking with Miss Kayla Frost?" Heard a female voice from the other side."Yes, I am," I said."You have applied for the post of the junior designer in Divaz International Ltd. Tomorrow is the interview for this job at 9. 30 am. You are supposed to be present at 9 am. Bring your portfolio with you." She mentioned."Yes, thank you," I said before cutting the call.Well, it was good news. Putting the phone back on the table, I dressed in a comfy baggy pant and a full sleeve t-shirt.The loud rumbling of my stomach reminded me how hungry I was and I didn’t have anything besides pasta or noodles since I got California. No vegetables, not even milk.I needed a meal, a nice and healthy one.Taking my purse, I decided to go out for lunch. I would buy groceries on my way back home.There was a Chinese restaurant here. I treated myself with chicken fried rice, sweet and sour short ribs, vegetables manchurian and prawn sizzling.Returning home, I stopped by a superstore and bought the groceries. I had to prepare myself for tomorrow's interview as well...................................................The next day,Third person's POV:It was 8 in the morning and Kayla was already ready. She wore an office shirt, pencil skirt and a pair of office heels. Before heading out, she checked her final look in the mirror.A confident smile played on her lips, she looked pretty good and professional in that get-up. The clothes might be professional but it decently hugged her body, emphasizing the curves.Locking her apartment, she walked out. Kayla never liked riding public buses. She traveled on a public bus only twice in her life.So, as she didn’t have her own car in California, the taxi was her only option.She reached the Divaz International Ltd by taxi. After paying the fare, she was about to enter the building but the security stopped her. After showing him the printed card of her interview, she could enter.She asked the receptionist where the interview would be held. She informed her to go to the 6th floor.Arriving on the 6th floor, she walked inside the large hall room where all the candidates were waiting.“Wow!”She was a bit shocked; the number of the candidates kinda overwhelmed. Even the fully air-conditioned room felt hot as it was jam-packed. There was no vacant chair to sit on. Many candidates were standing.One by one, candidates were being called inside a room. After waiting for more than an hour, finally, Kayla heard her name.Kayla, nothing to be nervous. It's not like your life depends on this interview. Just relax. You are gonna rock it.Kayla encouraged herself before entering but inside, she couldn’t help feeling nervous. Because the stairway to her dream was attached to this job.The quickly she could accomplish it here, the fast she would be able to grasp the opportunity of her success. Independence and success - these two were her mantra.With her head high in confidence, she walked inside the interview room gracefully."Hello, Good morning," She greeted in a pleasant and polite voice.But her jaw almost dropped on the floor when her eyes looked at the interviewers. There was a total of four persons. And one of them was the stranger she met five days ago in the bar and had hot, breathtaking sex with.………………………………………………………………….
Comments (4)

Bella Jersey
This should make an interesting interview

Marissa Briones
kayla will get the job 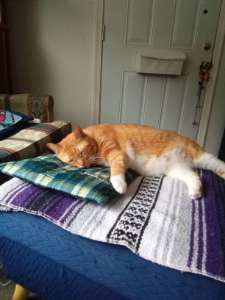 Jerri02
Yep knew Brandon would be there, he's the boss. LOL
VIEW ALL COMMENTS