The city that never sleeps. Where everyone is always rushing to their destination, and no one seems to stop to breathe. For them, life was chaotic and busy, but not for Christopher Melbourne. His life was different because he was unique.

At seventeen years old, he had already gone through so much in life. His father had passed away from cancer when he was just seven years old, and his mother had divorced from his step-father. He was also constantly bullied and harassed in school.

Christopher suffered from albinism. His skin was as pale as the winter snow, and his icy blue eyes almost disappeared under his white lashes. His bleach blond hair made him the laughing stock with his classmates, and they would call him many names—Milky boy, Snow White, and even the Ice Queen, to name a few.

He would spend his days alone inside his home, looking out the window, wishing for a better life. Christopher was close to graduating high school, but he wouldn’t finish it in the city as his mother had been transferred; from being a surgeon to being a clinic doctor at a small town in Montana.

It was a small downgrade, but she was excited about trying a different atmosphere. They both needed it; especially Christopher.

Grace packed the last of their belongings. Both of them were ready for their new adventure, or at least she was ready to start a new life.

“What else do you need help with, Mom?” he asked, picking up the last box from his room.

The movers had all the furniture and big boxes loaded in the moving truck. They were just waiting for Grace to give them instructions before they made the long ride to their destination.

“That’s all, sweetheart. We’re good to go,” she replied, locking the door of their small two-bedroom apartment for the last time.

It was an exciting experience—a thirty-two-hour ride by car plus the time it would take them to stop for food and lodging.

Closing the trunk after putting the last box in, they were ready for their trip.

“So, they will have a house ready for us, and the school already has your information so you can start as soon as we get settled. I saw pictures of our home and the town, and I’m sure you’ll love it,” Grace mentioned as she took his hand in reassurance, noticing how quiet her son was.

She shook him gently to get his attention, smiling faintly when he finally looked at her. His eyes were filled with sadness and disappointment.

“Mom, it could be the prettiest town in the country, but it won’t change anything. I’m sure there aren’t many people with my condition there, and it’ll all start over again,” Christopher replied, not looking at her but at the rain falling outside the window.

For him, bullying had always been a part of his life. He was used to them doing it, but he wasn’t sure how he would be able to ignore it when he arrived at his new school and they noticed him.

It would start all over again.

Grace looked back at the road and decided not to mention another word about their new home for the rest of the trip.

After eight hours of driving, there was still silence between them in the car. It was surprisingly comfortable. The music on the radio was the only thing playing, letting the noise fill in the air. Christopher loved to listen to rock, and Grace put it on for him to enjoy.

They found a service station and made their stop to eat and use the restrooms. It was a long drive, but Grace wanted to get as many miles as possible to make it to Montana in less time.

She parked her Jeep, both of them heading to the diner next to the gas station, starving and ready to rest for a bit. When they walked in, she figured they were regular customers as they watched her son, their eyes wide open while the room suddenly went quiet.

The waitress, a young woman in her mid 20s, greeted them with a big smile and invited them to sit down wherever they wanted before she would stop by to take their order.

“So, what do you want to eat?” Grace asked while they scanned the menu. Everything looked good to her.

“Nothing, Mom. I’m not hungry,” Christopher replied, playing with the ketchup bottle as he looked outside the glass window.

The waitress approached them to take their orders, giving their ticket to the cook right before she prepared their drinks.

They both waited patiently, the silence still there and Grace was concerned about him. All she wanted was for him to say something; anything that could give her hopes that he would be okay with the change of life.

After their quick meal, they made their way out of the diner and into her Jeep, driving off, leaving everything behind.

It took them longer than expected to arrive in Montana. Too many stops had delayed the trip, but they were finally there. Everything was new to them, and Christopher was already dreading going to school.

“It’s a beautiful town,” Grace said as they drove through. She noticed the townsfolk were staring at them, thinking they were new in town or just passing through as they had never seen them in their quaint little town. Chris scooted down in his seat, hiding his face from passersby. He was already feeling uncomfortable and wished he was back home in New York.

“Palmer, breakfast is ready!” Daisy said, calling her daughter for the fifth time. It was already seven-thirty, and Palmer was late for the school bus.

“I’m coming, Mom!” she yelled from her bedroom upstairs. She tried to choose her outfit for the day, but she was still undecided.

Palmer Wright was not your typical small-town girl. No cute summer dresses and cowboy boots for her.

Her style included jeans and tank tops under a leather jacket, sometimes biker boots. Depending on her mood, she’d wear a baseball cap or a visor beret. Today she felt like wearing her hair down with a black headband.

Palmer was a beautiful girl, with a rounded face, full lips, and freckled cheeks. She had brown hair that shone in the morning sun. Her turquoise eyes had the boys at her school swooning.

So typical of them. It was something she hated.

Walking down the stairs, loud enough for the house to echo her footsteps, she made her way into the kitchen.

“Haha. Very funny, Dad,” Palmer said, taking an apple from the glass bowl in the middle of the wooden dining table, sinking her teeth in the red, juicy fruit.

“You’re not eating breakfast?” Daisy asked as Palmer rushed out of the kitchen, not wasting more time than she had already wasted. “And why are you wearing those clothes? Didn’t I buy you a cute summer dress?”

“Mom, I love you, and I’m grateful, but you know I don’t like to wear dresses. They’re too girly for me,” she replied, kissing her mother’s cheek before she rushed out to catch the school bus.

“She’ll be the death of me,” Daisy muttered. Her husband heard her words with a smile.

“She reminds me of a certain beautiful girl I met in high school. Just as extroverted as her, too,” he replied while Daisy laughed, knowing it was true. Her daughter did not differ from her.

Palmer got on the bus just in time. She quickly sat next to Faith, her best friend. A girl with caramel skin and big hazel eyes. Her curly black hair would bounce at every movement, making her look like a cute, porcelain doll.

“Good morning, Sleeping Beauty,” she said with a grin, knowing Palmer had slept in more than usual and choosing an outfit was always like going to battle for her, long and painful.

“Well, I just heard about a new student coming to our school on Monday. He’s from New York,” Faith said with an excited smile on her face.

“What’s up with New Yorkers wanting to move to this part of the country? I thought they loved their precious, polluted city,” Palmer sighed as she put the earphones on her cell phone and gave one to Faith to listen to as well.

“Maybe they want to escape the chaos.”

“I highly doubt that. They’re way too proud of it. They won’t want to live anywhere else,” Palmer scoffed. She always thought people from New York were selfish and self-centered. She’d never liked them.

“Well, I heard it’s just him and his mom. His dad passed away when he was a kid. I also heard they had bullied him his entire life. Maybe they’re a nice family if we can get to know them?” Faith mentioned.

“You sure know the town gossip. Don’t you, my lovely friend?” Palmer said, pinching her cheeks as Faith slapped her hand away, making them both laugh.

The girls arrived at their school and got off the bus, giggling as they walked towards the entrance. They didn’t make it to the entrance when Gunner Travis, the high school track star, approached them. He was the popular jock, blonde hair with a surfer cut, sharp jawline, and blue eyes that had Faith drooling for him. He was also taller than most boys in school.

“How are two of the most beautiful ladies here?” he greeted them while putting his arm around Faith’s shoulder, winking at her. She looked at Palmer, shocked, biting her bottom lip nervously.

Palmer smiled at how cute they looked together. If only he dared to ask her out. She knew Gunner liked Faith but was too shy to invite her out on a date.

“We’re fine, Gunner. Thank you,” Palmer replied as he looked down at Faith with his dimpled smile.

“Did you hear about the new student?” He asked. Faith looked at Palmer again with a smirk on her glossy lips. It seemed like everyone knew about this kid except her. Shrugging her shoulder, she wasn’t paying attention to the conversation.

“I will catch up with you two later. I have to do something before class starts,” Palmer said, not waiting for a reply from them when she took off.

She wondered who that kid could be? Folks in town loved the gossip when new things happened. Her curiosity got the best of her, and she wanted to see what the fuss was all about. 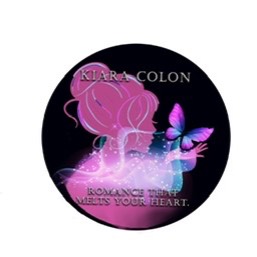 kiaracln28
You have no idea how much that means to me. I am having so much fun writing this story. I’m smiling and crying and all the emotions you can think of, so thank you so much for this amazing comment Val
Kiara, you just brought me here... cant wait to go home and read the rest of this, i was waiting for a friend when I opened it.
VIEW ALL COMMENTS